This Mourning – what can we learn PR-wise, from Holly and Phil’s queue “jump”? 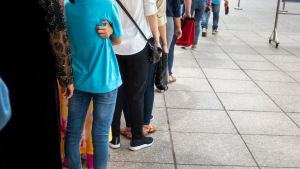 There is something uniquely British about queuing.

We pride ourselves on it and recent events have of course taken our queuing skills, patience
and monitoring to new heights.

There was even a Twitter feed and hashtag for #thequeue

However, things were taken up a notch when it appeared that Phil and Holly, the darlings of
morning television for so many years, “jumped” the queue to see the Queen lying in state last
week.

I say “appeared” advisedly because as we speak, I understand that Holly may have called in
legal advice and honestly, I can see why.

Although, it might have been an idea for ITV’s PR team to have jumped into action rather more
swiftly.

It seems that Holly and Phil “begged” ITV bosses to clarify the situation sooner, namely that
they were there as journalists/broadcasters as the pair were hauled over the coals in some
sections of the press – there are now some 29,000 signatures for a petition for them to quit their
jobs.

I’m not quite sure how that works but it shows the sentiment or at least SOME sentiment – many
people will have ignored the whole fiasco.

Whatever you might think about them “jumping vs working”, could it have been avoided whilst
they STILL did their jobs?

It all comes down to how CLEAR you think things are.

According to MailOnline an ITV source said:
“We absolutely made it clear at the time that it was part of a broadcast due to air on Tuesday.
This was communicated from the outset, and we gave this information immediately.”

The problem is, it doesn’t seem to be “absolutely” clear.

Indeed, MailOnline also reports that the pair “personally insisted that fiasco be addressed at the
start of the show and believe ITV should not have waited so long to speak out on the matter.”

It should have been addressed BEFORE the show, I’m talking DAYS before, with a clear
message about what they would and would not be doing and why they were doing things in a
certain way – in their eyes, to “tell the story” for those who couldn’t be there.

I’m not saying people would have agreed with the decision, in fact, it might have well have
stopped the broadcast before it happened. Maybe that would have been better because remember, perception is 9/10ths of the law.

PrevPreviousOne’sDay Wisdom
We use cookies to ensure that we give you the best experience on our website. If you continue to use this site we will assume that you Find out more.