Foiled again, what the AA can teach you about PR and customer service 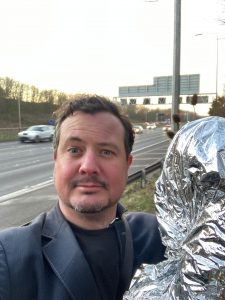 Now, clear any Paul Daniels flashbacks from your mind and picture me hurtling off the M1 in lane 4 with a blown tyre. This isn’t a thought experiment, this actually happened just a few months back.
I’ll be honest, it was pretty scary.

Not as scary as then having to get across 4 lanes in a rapidly slowing car.

Not as scary as having to access the embankment and watch car after car scream by at 80mph.

Not as scary as having to remain there, lest “my car be impounded if I abandon it” for over 3 hours.

In a blazer, t-shirt and jeans. In January!

What followed, over 8 hours (not joking) was 4 different calls to an apparently unfussed AA call centre, 2 different recovery vehicles, a Highways Agency welfare visit on the hard shoulder (after I braved the walk to the orange “BatPhone”) and a call from the same after I was spotted in a “foil dress” on the bridge – I was trying to keep warm but bless them for checking!

There were zero calls to me FROM The AA.

Even though they knew my situation.

Anyway, having sent a few very public tweets on the matter at the time and after thawing out at home, they finally got in touch over the weekend to try and tackle the issue. They were sympathetic (over a tweet, not a phone call) and offered to send me a cheque for my troubles.

I duly banked this.

However, they have just sent me a renewal letter.

This is the only communication I have received since #foilgate

Now, this is standard marketing automation stuff and is a process, I get that. However, nobody has thought to check their CRM for recent complaints, social media debates, criticisms or customer service nightmares. They have reduced me, once again, to a number.

The only difference is, this time I’m at my desk and not backed into a corner on the M1.

I don’t expect to be treated any differently to anyone else, I do expect their social team to talk to their call handling team and their renewals team. They might even want to check my name on their CRM for other products they offer because I do indeed have more than one.

But no, they haven’t, or, worse still….they HAVE and can’t be bothered to send a bespoke letter or friendly tweet or create/send a “stay with us” offer to send to me.

However, here’s what else hasn’t happened..

None of the other emergency services have followed me, reached out, checked my public email address on twitter and thought “oooooooh, opportunity here”.

They, like so many brands, are only broadcasting, they aren’t listening.

There are so many missed opportunities to keep, delight or even snaffle a customer (and his followers, friends, subscribers, column readers) but the systems or the culture just isn’t in place.

So I’m off to find a new supplier and I will not be wearing a foil dress this time.

Unless I want to, each to their own!

PrevPreviousMurdoch, Morgan, the Media and Me
NextAny port in a media storm for P&O in utter PR and HR ship-showNext
We use cookies to ensure that we give you the best experience on our website. If you continue to use this site we will assume that you Find out more.