Fancy a Tesla? – How to electrify your marketing with referrals 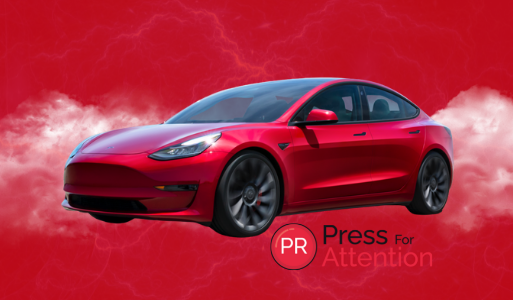 Which would you rather have: a  brand new Tesla…or cold hard cash?

That was the question my mentor Nigel Botterill asked me last week when a letter arrived in the post (it was also a digital campaign).

It made me pay attention because it interrupted my thoughts.

I mean, seriously, what would I rather have and how in the name of Elon would I get the choice?

You see, Nigel and his team had done some research. Scrap that, a LOT of research.

They discovered that it costs them just under £100 in marketing to get a new member into Nigel’s Entrepreneurs Circle. I’ve been part of this for a few years now and I am the local ambassador for Nottingham.

I host monthly events that help small business owners get better at their marketing or as Nigel likes to simplify things, “getting and keeping customers”.

‘What this means is that we had to pay the folks at Facebook and Google £100 in ads to generate the leads we needed to get a new member.’

Now, I know that they added thousands of members last year so they are not playing or thinking small here.

‘I’ve had an epiphany’, Nigel explained to me.

‘If we’re paying Zuckerberg £100 every time a new member joins, why not pay someone we actually know, like and trust?’

So he’s made it simple, if I refer someone, as I often do, Nigel and his team will send me £100 once they become a paying member.

They have even given the new member a month free to trial it because they know that on average, they will hit the retention numbers they need to drive their growth.

Note this, they know their numbers.

Far too many people see marketing as a cost, not an investment and spend way too much time trying to get customers on the cheap.

Well, guess what you get when you try this….cheap leads.

Now, throw in a Tesla and it gets very interesting.

You see, as soon as they’ve taken their free “test drive” and signed up, they get entered into a prize draw for a Tesla, as do I!

The car is drawn when they get 500 entries so the chances seem pretty good(!).

Now, I’m not writing about this to drive referrals or entries for my benefit, although it wouldn’t hurt to have the choice of £30,000 or a new Tesla!

It also wouldn’t hurt you as an ambitious business owner to click my link to find out more and to take the free test drive!

I am walking you through the thinking here because I know most people simply do not think like this.

They do not know what they are willing to spend to get a new customer.

Because at the end of the day, no matter how much fairy dust and jargon we sprinkle over marketing, it is just about buying customers.

I buy my customers via my time on my own PR, content marketing, social media, speaking opportunities, sponsored columns and events.

It is all just marketing.

The difference between how Nigel and I look at it (other than a few noughts!) and the way most people look at it is this urge to do it as cheaply as possible and with their eyes wide shut!

There’s no need to give away a Tesla but at least know your numbers. I might invest in a Corgi Tesla set now…watch this space.

PS you can find out more about this campaign HERE or why not join me at my Nottingham networking and business growth events where I will simply help you to get and keep customers?

PrevPreviousThe “bard”, your brand and the power of media love this Valentine’s Day
NextDriving demand with high-tech tactics = Sunday Times coverageNext
We use cookies to ensure that we give you the best experience on our website. If you continue to use this site we will assume that you Find out more.